Standing 4810 m high, Mont Blanc is obviously for experienced mountaineers. Such an extraordinary climb is not for just anyone. Good preparation, INFORMATION and equipment are fundamental pre-requisites. 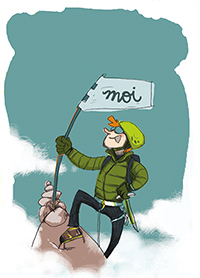 The top of Europe, the Mont Blanc catalysis the desires of unattainable and the threshold of attendance is reached today, with all the associated excess (risks, waste, misinformation about the difficulty of the ascent…).

Considered like a « doable feat » to have on his personal resume, the Mont Blanc is quiet often presented like an idyllic adventure. Wrongly. Even if it seems so close from the valley.

The Mont Blanc, an alpinist reward !

By perfect weather and conditions, climb up the Mont Blanc can be ideal. But it can became very harsh and even dangerous depending on conditions that may be encountered (snow, wind, fog, cold) and fatigue. The sequence can quickly be infernal…

To attempt Mont Blanc with a good chance of success, experience of high mountains, regular training and preparation are essential.

At 4810 m  elevation, a trained person can only produce 70% of the effort compare to sea level. This value decreases even more with cold and fatigue.

– 350 to 400 departures every summer day through the different routes.

– Cabins overwhelmed and up to 70 tents reported on Col du Midi even if camping is not allowed.

– Huge amount of waste abandoned on a Classified Site. 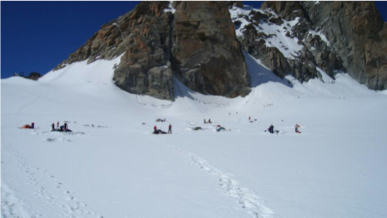 – 80 to 100 rescue interventions every year (sometimes several per day!) included 80 % because of exhaustion due to poor physical preparation and/or lack or acclimatization

• Estimate the difficulty and the conditions

– Between 40 to 100 % of failure every day. Hired a high mountain guide certified IFMGA** increases very significantly the chances of success.

There are different routes, as Italian or French side. Among them, some are classic and can be extremely popular. They each have specific “natural” risks. 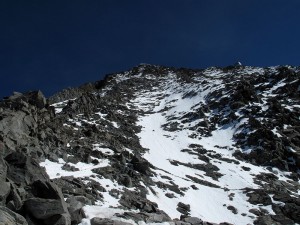 This is the route having the less technical difficulties, nevertheless it must be approached with distrust 74 fatalities from 1990 to 2011 (PGHM / Petzl Foundation study) due to the numerous rockfalls descending one of the gully (see below) one has to cross to reach the Goûter refuge.

Early in the season, when snow is melting, rocks and boulders are dislocated. Later, boulder and rockfalls are produced by the thaw action on the mountain side that climate change speed up. Wearing a helmet is mandatory. Tons of rocks can come down from hundreds meters higher!

From the Goûter refuge up, the route is entirely made of snow and ice, with the associated risks implied (icy slope, crevasses). 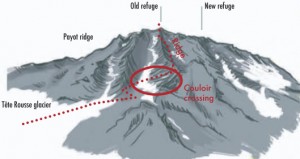 Approximately half of all accidents occur along the 100m couloir crossing, and one third along the ridge.

Most are caused by a climber falling, often directly or indirectly related to a rock fall. In relation to traffic, there are at least as many accidents on the way down, particularly along the ridge. We also know that two thirds of all casualties were not roped, and that fewer accidents involve people accompanied by a professional guide. A study carried out in summer 2011 concerning the couloir alone estimated that one thousand of the estimated 17 000 crossings of the couloir were affected by rock fall. While rock falls can occur at any time of day or season, certain factors can aggravate or reduce the risk.

• Cloudy weather, with little sun. The presence of snow in the couloir has no influence on the regularity of rock falls. However, it does help to prevent other blocks being pulled down and rocks rebounding along the couloir.

How to cross the Goûter couloir ?

As with all the other parts of the routes, accessing the current conditions remains an essential factor when choosing the techniques to be implemented. The main principles to be remembered include :

• Always wear a helmet and stay roped together.

• Prepare your equipment a good distance before crossing the couloir and not closed to the edges, which are highly exposed.

• Check current conditions before deciding whether or not to cross the couloir.

• If possible, keep a lookout from a sheltered position for the roped party before you.

• Do not waste time in the couloir, but do not hurry unnecessarily either.

• If the snow means your crampons hold well, you may not need the cable. Otherwise, use the cable according to recommendations (attached with a suitable technique, using a “floating” karabiner between two members of the roped party)

• Along the ridge, use the cables and their anchors for belaying- but beware, this is not a via ferrata.

The way up the first two is exposed to avalanches and serac falls. 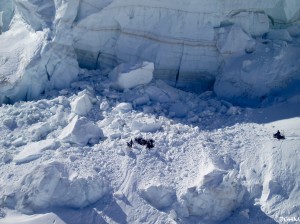 Glaciers are in continuous evolution: they progress by sliding and distortion of the ice. Also, and opposed to what is often said, seracs falls (huge ice mass created by the cracking of the glacier) can happen anytime, whatever the temperature. Those events can be the origin of snow and ice avalanches. It is usefull to wear the proper equipment (avalanche beacon, probe, shovel) and to know how to use it.

The steepness (Mont Maudit: lopes up to 45°) and the eventual issues to cross bergschrund should be also taken into account 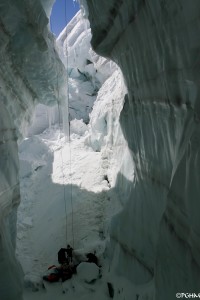 « Zero » risk doesn’t exist in high mountains environment. It is necessary to take all the arrangement to minimize the exposure.

Beyond altitude risks and more generally high mountains environment risks, the greater risks are maybe inherent to the contenders themselves: do not know how to renounce, poor judgment due to the group effect, thinking that the crowd around means safety…

To hire a guide

To hire a guide is safer and also more chance to succeed !

Where to get information ?

Enquire about the route, current risks and conditions.